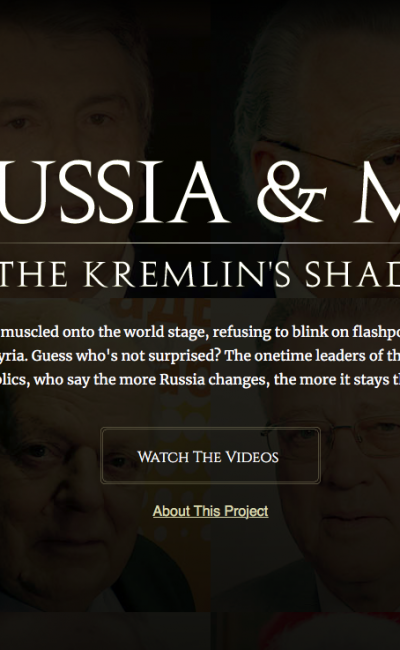 As the world wrestles with a warring Russia, twelve former post-Soviet heads of state say that Moscow’s resurgence is no surprise. An interview project titled Russia and Me presents exclusive interviews with leaders who in 1991 helped establish or restore the independence of Armenia, Belarus, Estonia, Georgia, Kyrgyzstan, Latvia, Lithuania, Moldova, and Ukraine. Their recollections are personal and individual, but they all reference the familiar historical moment when the constituent republics of the Soviet Union asserted their independence from Moscow. Journalist Anna Sous of the Belarus Service who conceived the project and conducted the interviews, said that “every one of these countries has its own Crimea;” each leader interviewed had the unique experience of negotiating — some successfully and some not — with Russia. Many spoke warmly of former Russian President Boris Yeltsin, who they said preferred negotiation over conflict. According to Lithuania’s first post-Soviet head of state, Vytautas Landsbergis, Yeltsin had “honor and pride.” Former Belarusian President Stanislau Shushkevich added, “[Yeltsin] abided strictly by the principle of the right to national statehood. Genuinely, not hypocritically.” Regarding Russia’s invasion of Ukraine, former Latvian President Guntis Ulmanis, looking back, said, “I couldn’t believe the West didn’t see it coming.” For his part, former Ukrainian President Viktor Yushchenko, forecasting the future, said, “Russia plans to create a wound that will bleed for years.” In addition to those already mentioned, the former leaders included in the interview series are former Armenian President Robert Kocharian; former Estonian President Arnold Ruutel; former acting president of Georgia Nino Burjanadze; former Kyrgyz President Askar Akaev; former Moldovan presidents Petru Lucinschi and Vladimir Voronin; former Lithuanian President Rolandas Paksas; and former Ukrainian President Leonid Kravchuk.